As per description in the Skanda Purana , among the twelve Yatras of Shree Jagannatha, Ratha Yatra or Shree Gundicha Yatra is considered the most famous one.

According to ‘Bamadev Samhita’ those who can witness the four deities on the Simhasana (the sacred seat) of Gundicha Temple for a week, they along with their ancestors would get a place in the heavenly abode i.e. Baikuntha for all time to come. As per this text those who can hear about this great festival they also get the desired result. Besides this, those who study the rituals of the divine festival and make others aware of the same they can also get a place in his holy abode.

The Ratha Yatra of the ‘four deities’ takes place on the 2nd day of the bright fortnight of Ashadha for the overall well-being of the mankind. In the Skanda purana it has been described that no festival of Mahaprabhu is more important than that of the Shree Gundicha Yatra. Because, Shree Hari the supreme Lord of the cosmos rides & his chariot in a very delightful mood to the Gundicha Temple to fulfill His pledged command.

As the chariot is a symbol of “Sandhini Sakti” mere touch of the chariot would confer compassion of Lord Shree Jagannatha on the devotees. The famous verse in this context is as follows:

After the completion of morning rituals of the deities such as Mangal Alati, Abakash, Ballabha, Khechedi bhog etc on the 2nd day of Ashadha Sukla tithi the “Mangalarpana ritual” is performed. The four deities come in a pahandi (ceremonial procession) and board the sacred chariots one after the other. The deities namely Lord Sudarsana, Lord Balabhadra, Devi Subhadra and Lord Shree Jagannatha come serially in pahandi and board their chariots. After the Pahandi the proxy divinities (beje pratimas) such as Rama and Krushna are placed by the Mahajana servitors on the chariots i.e ‘Taladhwaja’ and Madanamohan on the ‘Nandighosha’ chariot respectively.

After boarding of the deities in their respective chariots the deities are decorated with ‘malachula’ and Besha on the chariot. The Chhera Pamhara (moping the chariots in a golden broom) ritual is performed by the Gajapati Maharaja is brought in a ceremonial procession by a Tamjan (palanquin) from the Shreenahara (king’s palace). Gajapati offers camphor lamp in a golden diya (lamp) to the deities. This is followed by alata and chamara ritual. The king sweeps the floor of chariot by a golden broom and thereafter sprays sandal paste on the chariot.

As per tradition, after the chhera pamhara the Bhoi sevakas remove the Charmala from the chariots. Each chariot is tied with four wooden idols of horses. The kahalia servitor blows kahali (trumpet). This is followed by beating of gongs. Thereafter the chariots are pulled. Ratha Dahuk (the jester-like minstrel) sings many songs to enthuse the crowd to pull the chariot enthusiastically. The chariots are pulled towards the Shree Gundicha Temple. Which is situated at a distance of three kms. Thereafter the deities such as Lord Sudarsana, Lord Balabhadra, Devi Subhadra and Lord Shree Jagannatha are taken serially by Daitapatis in Pahandi to the Simhasana inside Gundicha Temple. All rituals similar to that of Shreemandira are performed in the Shree Gundicha Temple during the seven days stay of the deities in the said temple.

As described in the puranas getting a glimpse of the four deities on the Adapa Mandap during the evening (Sandhya Darshana) brings incessant bliss to a devotee. As described in ‘Niladri Mahodaya’ seeing the deities continuously for 10 years in Nilachala (Shreemandira) in equivalent to witness the deities for one day only at Adapa Mandapa at Gundicha Temple Especially, if one sees the deities during evening / night hours gets ten times more than the desired results. The Sandhya Darshana ritual is performed on the day before Bahuda Yatra (Return car festival) since ancient days. 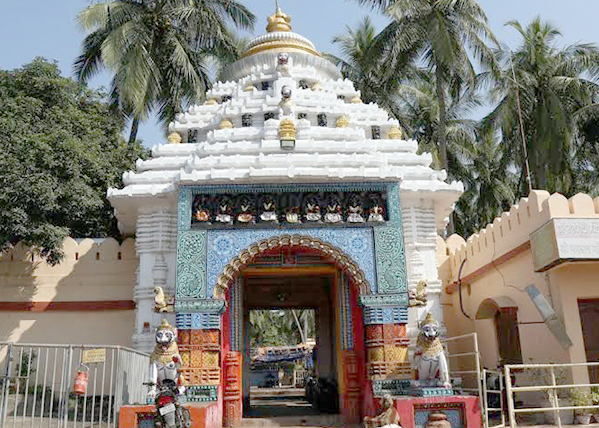 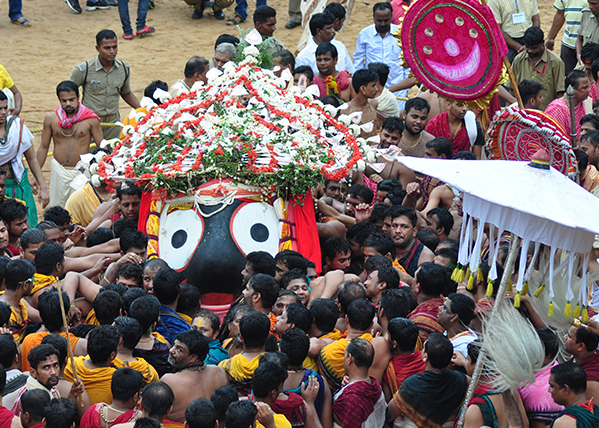 The return car festival or Bahuda Yatra is known as “Dakshinabhimukhi Yatra” (movement of chariot towards south). On Ashadha Sukla Dasami, the Bahuda Yatra is celebrated with certain rituals such as Senapatalagi, Mangalarpana, and Bandapana etc. When the three chariots are on their way back to Shreemandira, a special type of cake (Poda Pitha) is offered to the deities at Mausimaa Mandir. Thereafter the chariots of Balabhadra and Subhadra proceed further and are stationed in front of Singhadwara. But the chariot of Nandighosha of Lord Shree Jagannatha halts at Shreenahara. Goddess Lakshmi is carried in a palanquin to Shreenahara and Dahipati ritual and ‘Laxmi Narayan Bheta’ nities are performed there.

Getting a glimpse of the deities on the south ward journey during Bahuda gives incessant bliss and removes all sins and afflictions.

During the last phase of the Gundicha Yatra the deities are adorned with gold ornaments on the chariots in front of the Lions Gate on the Sukla Ekadasi tithe and the devotee’s witness the ‘Suna Besha’ of the deities.

On Ashadha Sukla Dwadashi (12th day of bright moon phase) Adhara Pana (a special type of sweet drink in which cheese, milk, sugar, spices are mixed) is offered to the deities on the chariots.

Niladri Bije is a special event i.e. the last phase of Shree Gundicha Yatra. The four deities return to the bejeweled platform in a ceremonial procession on the thirteenth day of the bright fortnight of Ashadha.

Shree Gundicha Yatra in Puri is considered one of world’s largest religious festival and which is being celebrated since time immemorial.