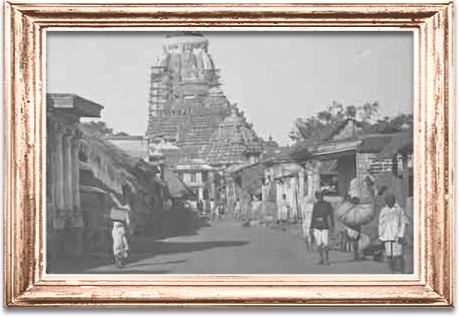 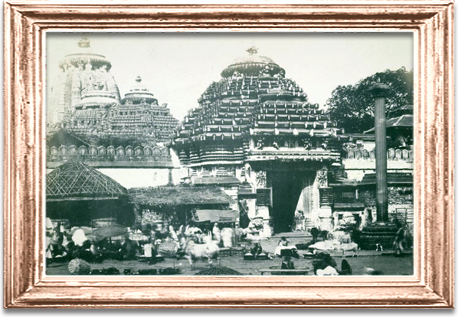 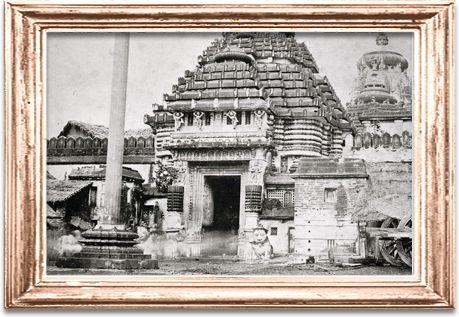 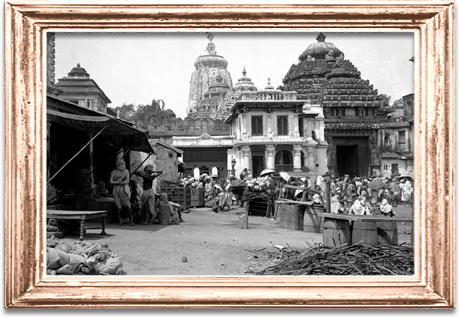 THROUGH THE AGES >> Ancient 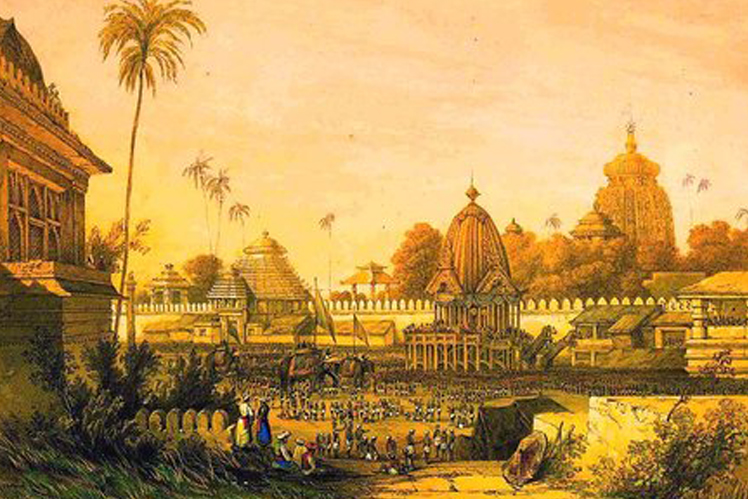 Legendary origin of Puri and the shrine of Purushottama has been described vividly in Brahma Purana, Narada Purana and Utkal Khanda (Purushottama Mahatmya) of Skanda Purana. Among these three Puranas the description of Skanda Purana is more elaborate. As per the Purana, King Indradymana was ruling over the Malava Country in Satya Yuga (the age of Truth). Indradymna was a great devotee of Vishnu. Once he came to know about Purushottama, on the shore of the South Sea from his family priests and pilgrims. He was informed that, on the Nilachala (blue hill), image of Vasudeva made of blue sapphire was being worshipped by the Sabaras (a tribal clan). The King in consultation with the family prist, deputed Vidyapati (the brother of the priest) to locate the site. Vidyapati, after travelling a long distance, reached the place and met Viswabasu, the chief of the Sabaras. Though unwilling at the outset, Viswabasu later agreed to take him to the deity, after recollecting the prophecy that Nilamadhava would in the coming years, be consecrated by King Indradyumna. By the grace of the Lord, Vidyapati had the divine darshan of Nilamadhaba. Also he had witnessed the Rohini Kunda (the divine pool) and Kalpabata (the divine Banyan tree) in its surroundings.

King Indradyumna, after hearing the experience of Vidyapati, arranged a visit to the place of worship of Purushottama along with his family, ministers and priests. Narada, being deputed by Brahman to assist Indradymna, joined them. Brahman had known that in future the Lord (Vishnu) would conceal his present image of Nilamadhaba and reveal Himself in the form of Purushottama, assuming a wooden image.

After reaching there, the King performed one thousand Ashwamedha Jajna (sacrifice) and before the final offering in it, a massive Divine Log of wood appeared on the shore of the sea. The King brought the Divine Log of wood to the Mahavedi (a high altar) on the advice of sage Narada. Then Vishnu Himself appeared in the garb of a carpenter and carved the images. The king, as per the divine advice, got the images wrapped in silken cloth and painted them in prescribed colours. He then constructed a temple near the Kalpabata. As per the advice of Narada he then went to Brahmaloka (the abode of Brahman) along with the sage and Brahman came and consecrated the temple. Images were installed there. Indradyumna then introduced the daily and special festive rituals as per the order of the Lord. 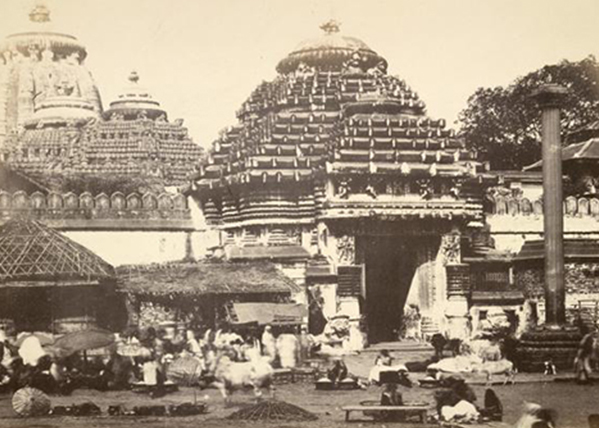 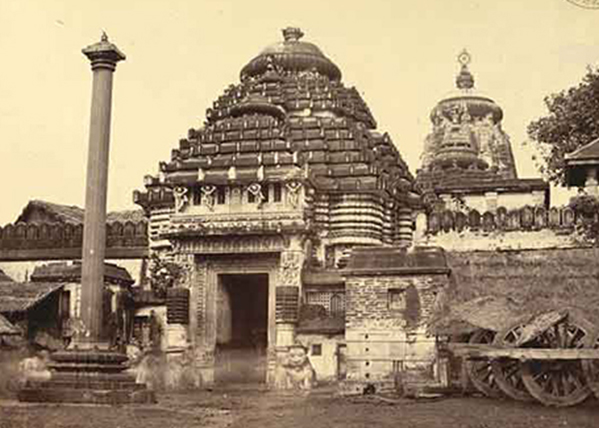 Prior to ‘Jagannatha’, the Lord Supreme was worshipped as ‘Purushottama’. The word Purushottama is constituted from two words in Sanskrit, ‘Purusha’ and ‘Uttama’. In Rigveda, among the numerous Gods and Goddesses, we come across the God named ‘Purusha’. Out of the 1028 hymns, 16 verses are addressed to Him. The hymn is known as ‘Purusha-Sukta’. In the hymn, the God Purusha is stated to be the creator of the whole world, in which He himself pervades as the creator. He is also the protector and the destroyer of the world. Thus, the ‘Purusha-Sukta’ conceives a Supreme God in contrast to the earlier concept of numerous Gods.

This Supreme God, Purusha is later recognized as Purushottama when the conception of ‘Brahman’ developed. In Bhagabat Gita, Krushna himself says that there are two Purushas in the world- the ‘Kshara Purusha’ and the ‘Akshara Purusha’. But he himself is above both the ‘Kshara’ and ‘Akshara’ Purushas- and is therefore called ‘Purushottama’. Persons knowing Him as ‘Purushottama’ know everything and worship him.

The ethnicity of the holy city of Puri coincides with the commencement of the worship of the Lord Supreme. Sayanacharya, the illustrious commentator of the Vedas, on the basis of ‘Alakshmi’ hymn of Rigveda traces the origin of this Kshetra to Vedic times. In his Rigveda Samhita he has interpreted the word ‘Daru’ of “Ado Yaddaru Plavate…” as ‘wood’ and connected it with the wooden body of the God called Purushottama. A similar interpretation also has been given in Skanda Purana, Sri Purushottama Kshetra Mahatmya. In verse-3 of Chapter 23, this Vedic verse is reproduced in Anustuv meter as “Ya esha plavate daruh…” It says “The divine log that has floated to the sea coast is beyond understanding of humans. Through devotion towards this which is beyond worship, one attains extreme and rare state of salvation.” 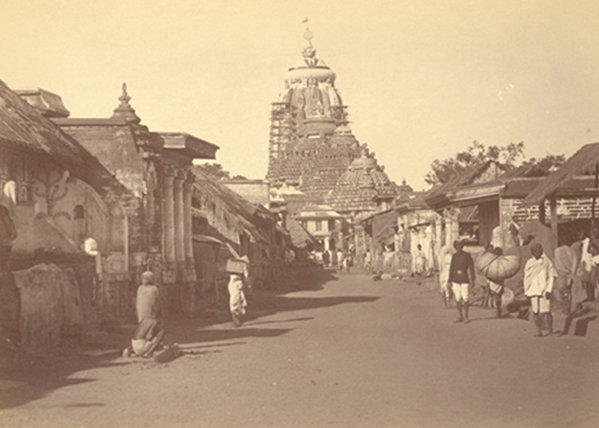 In Uttara Kanda of Ramayana, there is a reference to Jagannatha, who was the family deity of the Iksaku dynasty. As per description, Rama had advised Vibhisana to worship Him regularly. However, according to some scholars, the word Jagannatha of the Ramayana can not be identified with the Lord Jagannatha of Puri.

The Padma Purana refers to the visit of Satrughna, the younger brother of Rama, to this holy Place, in chapters 17 to 22. Mention of this holy kshetra of Puri has also been found in Garuda, Matsya, Agni, Vayu, Kurma and Vamana Puranas. In Vishnu Purana and Bhagabata Purana also, the words Purushottama and Jagannatha has profusely mentioned; but with reference to the context, one can hardly refer these to Purushottama Kshetra or the abode of Jagannatha of Puri.

But subsequent works in Sanskrit like KapilaSamhita, VamadebaSamhita, NiladiriMahodaya, Sri MahapurushaVidya and few others apparently composed in Odisha describe this kshetra. Though scholars differ widely about the dates of composition of these Puranas, the description of Purushottama-Jagannatha amply establishes Puri as an ancient city and the holy abode of the Lord Supreme, Shree Jagannatha.

The Sailodbhaba kings are known to have ruled over Kangoda during 6th to 8th century AD. Though they seem to have patronised Shaivism, later on they were referred to as having patronised the Brahmanical religion as a whole.

According to eminent historian Dr. Satya Narayan Rajaguru, the Sailodbhaba king Madhavaraja-II (620-670 AD) had established the shrine of Madhava at Puri and wanted the deity to be called Neelamadhava, because of its blue stone image. The king had also created an establishment at Puri, with some tribal chief as its head and had made arrangements for daily worship.

After the Sailodbhabas, the Bhaumakaras carved out a kingdom and their seat of administration was Guhadeva Pataka or Guheswara Pataka, the modern Jajpur of Odisha. The dynasty witnessed as many as 17 kings and queens, who ruled over Odisha from 8th to 10th century AD. Although they were Buddhists at the beginning, they were tolerant of Brahmanism including Vaishnavism and Saivism. So they continued the worship of Madhava at Puri. Later on, the Bhaumakara rulers were converted to Saivism and Vaishnavism. Queens Tribhuvana Mahadevi I, II and III- all were Vaishnavis.

Earlier, the Bhaumakaras were Mahayani Buddhists. During their reign, some Tantric elements were introduced in worship of Jagannatha. Buddhism gave way from Mahayana to Tantrayana and then to Bajrayana, Kalachakrayana and Sahajayana. All these systems of religion grew in Odisha. As per researchers, some tantric elements have entered into the rituals of Jagannatha during this period, of which some are still prevalent.

The rule of Bhaumakaras came to an end in the 1st quarter of 10th century AD and Somavansa (Soma dynasty) came to power in Odisha. The temple chronicle ‘Madala Panji’ mentions Yayati Keshari as the first king of the dynasty. As per the Panji, Yayati Keshari constructed a temple for Jagannatha, referred to as ‘Paramesvara’. The temple was 38 cubits in height. It is also mentioned that, 146 years prior to his rule, one Raktavahu invaded the country and the priests had removed the images to a village named Gopali in Sonepur state (now a district) of Odisha. Yayati Keshari, during his 11th year of reign came to know of it and after recovering the ‘Brahma’ and carving out new images, consecrated and installed them in the new temple built by him.

The Somavamsi rule was finally supplemented by the Gangas, when Anantavarman Chodaganga Deva annexed Odisha and shifted his capital to Varanasi Kataka (modern day Cuttack) in 1110AD.

Anargharaghava Nataka of Murari Mishra is a Sanskrit drama and as per scholars it is written in 9th-10th century AD. It refers to a festival in honour of Purushottama. In Probodha Chandrodaya Nataka, another drama in Sanskrit, written by Krushna Mishra in 11th century AD also, Purushottama as the name of a country has been mentioned. A character of the drama declares to have come to the country. These two slender references establish the fact that the holy city and the shrine of the Lord Supreme was very much in existence by 10th century AD. Another important reference has been traced in Ratnamala of Satananda Acharya, a smruti writer of 11th century AD. He has offered prayers to Purushottama at the commencement of his work.

Mentions regarding pilgrimage to Purushottama also found in different inscriptions such as Govindpur inscription of Rudradamana, issued in 1137 AD and inscription of Naga king Gopaladeva of Madhya Pradesh. These references bear ample evidence of the fact that the Purushottama Kshetra or Puri and the shrine of the Lord had attained immense popularity during 10th-11th century AD.