Old Sanskrit texts, right from Brahma and Skanda Purana onwards, contain prescription about the observance of twelve festivals in the temple of Jagannatha throughout the year. These twelve festivals, popularly called ‘dvadasa yatras’.

This festival is observed on the full moon day of Jyestha (towards the first part of June), when the principal wooden images are brought to Snana Vedi Mandap and are poured with 108 pitchers of water mixed with sandal wood past, camphor and other incenses. The images of Shree Balabhadra and Shree Jagannatha are then decorated with the masks of an elephant, which is known as ‘Gajanana Besha’. On the night, the deities return to the Temple and are placed at ‘Anasarapindi’.

The deities are scheduled to stay in the ‘anasara’ from the night of ‘Debasnana Purnima’ to the Amabasya (new-moon day) of Ashadha. Nobody can go inside the ‘anasara’ except Daitas and Patis during the anasara period.

This famous festival is observed on the second day of the bright fortnight of the month of Asadha. Three huge chariots (cars) are constructed for the purpose. The deities of Shree Balabhadra, Devi Subhadra, Shree Jagannatha and Shree Sudarsana are seated in these chariots and moved to a temple known as ‘Gundicha ghar’ which is at a distance of about 3 Km, where the deities stay for a period of seven days on the 10th day of the same fortnight. The deities are carried back to the temple.

The Ratha yatra or Gundicha Yatra of Shree Jagannatha is the most famous and wide spread festival known even in the international sphere.

On the evening of the 11th day of the bright fortnight of Asadha another important ritual called ‘Hari Sayan Ekadasi’ is performed. After the ‘Badasinghara Bhoga’ when the ‘Mahasnana’ and puja are over, the three metal images of Sayana Thakuras namely Basudev, Bhubaneswari and Narayana carried by three Pujapanda to the respective chariots. Some special rites such as bhoga, Karpura alati are performed by Pujapanda. Then the small images of Sayana Thakuras proceeded to ‘Sayana ghara’ (bed room). The Mudirasta performs the ‘Prasad lagi’, ‘alati’ and ‘Bandapana’ for the deities.

On the day of karkata (Scorpio) sankranti, special rites are performed, as the sun begins to move to the autumnal equinox.

On the Bhadraba Sukla ekadasi day, after the ‘Bhoga Mandapa’ is over, Mahasnana and Chandana lagi of three deities are performed and they are dressed in new clothes ‘Sarbanga’ and Bada singhara Bhoga are performed. Then the seal given on the Khataseja ghara is broken for the purpose of ‘Parshwa Parivartana’ ritual, the Sayana box of the deities is opened. After offering white flowers to the ‘Sayana Thakura’ (the image meant for sleeping) he is made to turn on his side (Parshwa Parivartana). Before this, the face of the Sayana Thakura is to the South, then the face is changed to the North.

On the Sukla ekadasi of Kartika, the ritual of Hari Utthapana is observed. This is done from Ballava to Badasinghara like the ‘Sayana ekadasi’.

On the 6th day of the bright fortnight of Margasira, Prabharana Sasthi rituals are observed in the temple of Shree Jagannatha. From this day ghodalagi of the deities begins. The deities wear winter garments. After the deities are offered ‘ghodas’ and silken clothes on the Ratnasinghashan, six pieces of gold ornaments are also given. When the prasada lagi at the ‘shianga’ of the deities, the Pujapanda, Pati Mahapatra and Mudirasta perform the ‘Bandapana’ ritual of three deities. 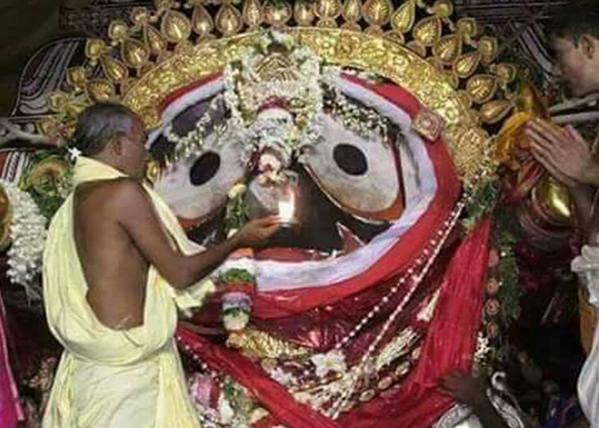 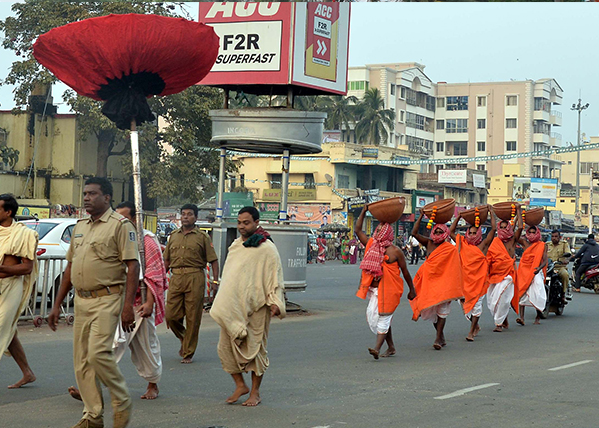 This is celebrated in the month of Pausa. After alati and abakash on Makar Sankranti, the deities are offered ‘Phuta paharana’ (a kind of cloth). The ‘Makara Chula’ is offered at Trimundi. Then follow ‘Mala lagi besha’ and Karpura lagi. On this day, the Yatrangi bhoga known as ‘Makara Chaurasi bhoga’ is brought from kitchen in a procession with the accompaniment of ‘ghanta- chhata – Kahali’ rice mixed with ghee, spices, cream, sweets and some fruit juice is offered to the deities.

Dola Yatra is one of the important festivals of Shreemandira and is celebrated from the 10th day of the bright fortnight to Phalguna up to the full moon day.

On the full moon day, the images of Dolagovinda, Shreedevi and Bhudevi are carried to Dolavedi a high Pavilion, a little way off the temple at the north-east corner. Special offerings of different dry food are made to the deities. On completing this ritual, the deities are placed on the swing. Then the arrangement is done for public ‘darshan’ on the “Dolabedi”. 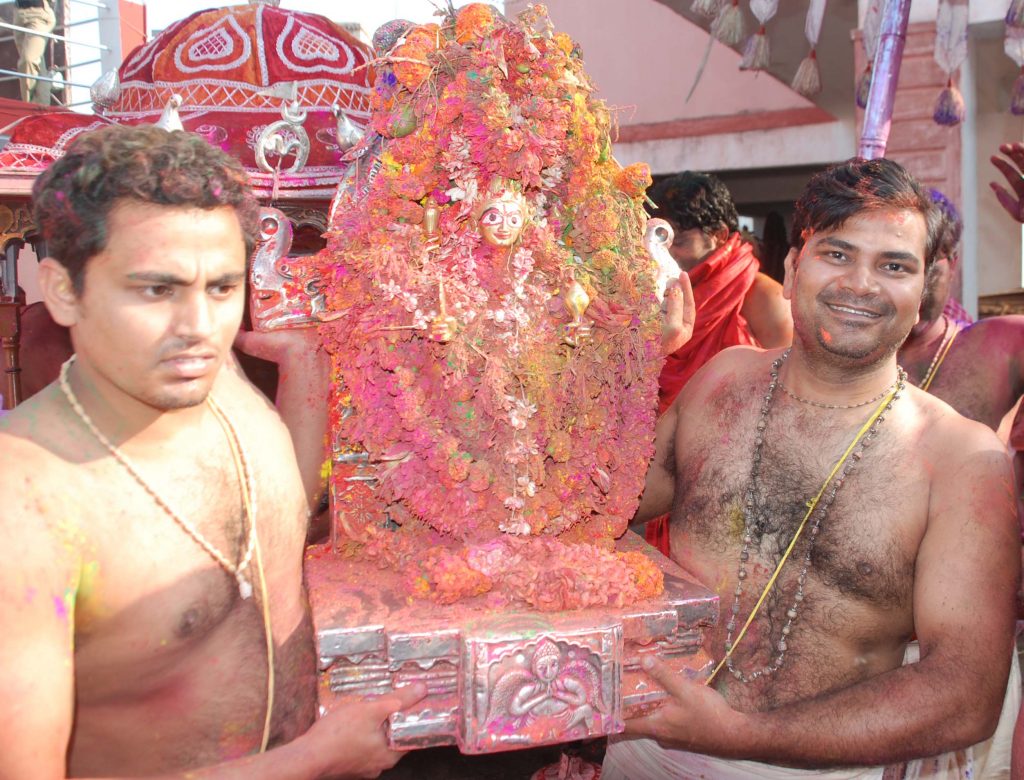 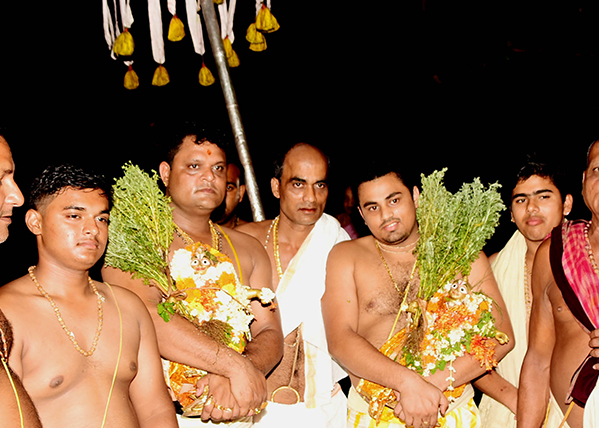 Celebrated on the 13th and 14th day of the bright fortnight of chaitrn. The representative deities- Rama and Krishna are taken in a procession to Jagannatha Ballava Matha, cohere the deities pick-up their dear ‘Dayana’ leaves form the Matha garden and on the 14th day, the leaves are offered to lords.

Akshaya Trutiya is an important festival of Shreemandira. The Chandan Yatra starts from Akshya Tritiya i.e. the 3rd day of the bright fortnight of Baisakha. From this day onwards construction of the chariots for the Ratha Yatra starts. The Chandan Yatra is celebrated 42 days, divided into two period of 21 days each, which is known as ‘Bahar Chandan’ and ‘Bhitara Chandan’. During this period, the representative image of Madanmohan, Rama, Krishna, Bhudevi, Shreedevi and five Shivas (known as Panch Pandavas) are taken in a procession to Narendra Tank. The images play in well decorated boats and are worshipped. 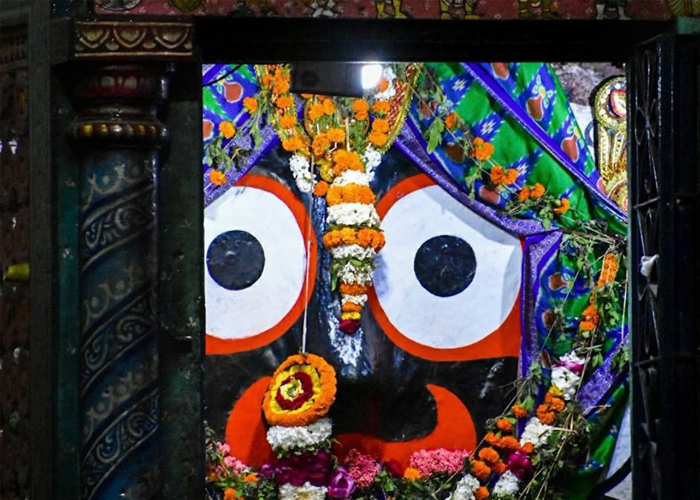 Celebrated on the 8th day of the bright fortnight of Baisakha 108 pots of consecrated water are offered to the deities and some special rites known as ‘Abhisheka ritual’ is performed on this day.