Shreekshetra is one of the many names of Puri. Located on the shore of Bay of Bengal in the State of Odisha, this centre of pilgrimage is considered to be the Holiest of the Holy places in India as it is the most sacred eternal abode of Lord Jagannatha. In ancient scriptures, such as Skanda Purana and Brahma Purana, Lord Jagannatha is also referred to as Lord Purushottama and His sacred Abode, Puri, is named after the Lord Himself as Purushottama-kshetra. This holy kshetra, in fact, is proclaimed to be the sacred “body” (“Bapuh”) of the Lord Himself. The glory of Purushottama-kshetra is mentioned in the Skanda Purana in the following words:

“Although Lord Jagannatha is all pervading and is the source of all and there are also other holy places which destroy all sins, yet this holy place is superior as it has become the body of this Supreme Being. He Himself is present there assuming a Form and has indeed made that place known by His own name”. (Utkala-khanda, Chapter 1, verses 8 & 9).

Puri is one of the four “Dhams” or most sacred places of pilgrimage in India for Hindus. The great reformer of Sanatana Vaidika Dharma, Bhagvatapada Adi Shankaracharya declared these four sacred Dhams to be Jagannatha Puri in the east, Dwarika in the west, Badrinath in the north and Rameswaram in the south. However, the primal position which Adi Shankaracharya accorded to Puri is evident when he installed his senior-most disciple, Padmapada, as the first Acharya of Shree Goverdhan Peeth established by him in Puri and declared Rigveda (the first and most sacred among the four Vedas) to be the scripture for propagation by this Peeth.

According to Brahma Purana, Purushottama kshetra is spread over ten yojanas (90 miles) and a width of five kosas (ten miles). The sacred kshetra is also known as “Shankha-kshetra”, “Neelachala”, “Uddiyana-peetha”,“Dasavatara-kshetra”, “Martya-Vaikuntha” etc. With the Holy Temple of Lord Jagannatha in the centre, the sacred Kshetra is divinely guarded by Ashta-Shivas (eight forms of Lord Shiva), Ashta-Shakti (eight forms of Goddess) and Ashta-Mahaveer (eight forms of Shree Hanuman) and contains innumerable sacred temples and holy sites. Five “Tirthas” (holy sites), namely, Markandeya sarovar, Shwetaganga sarovar, Narendra sarovar, Rohini-kunda and Mahodadhi (sea) as well as ashramas (hermitages) of four ancient Rishis, namely, Angira, Bhrugu, Kandu and Markandeya are situated within the kshetra. The great Acharyas of the various Vedic sampradayas, such as, Bhagavatpada Adi Shankaracharya, Shree Ramanujacharya and Shree Nimbarkacharya also established monastries of their respective sampradayas in this holy place. 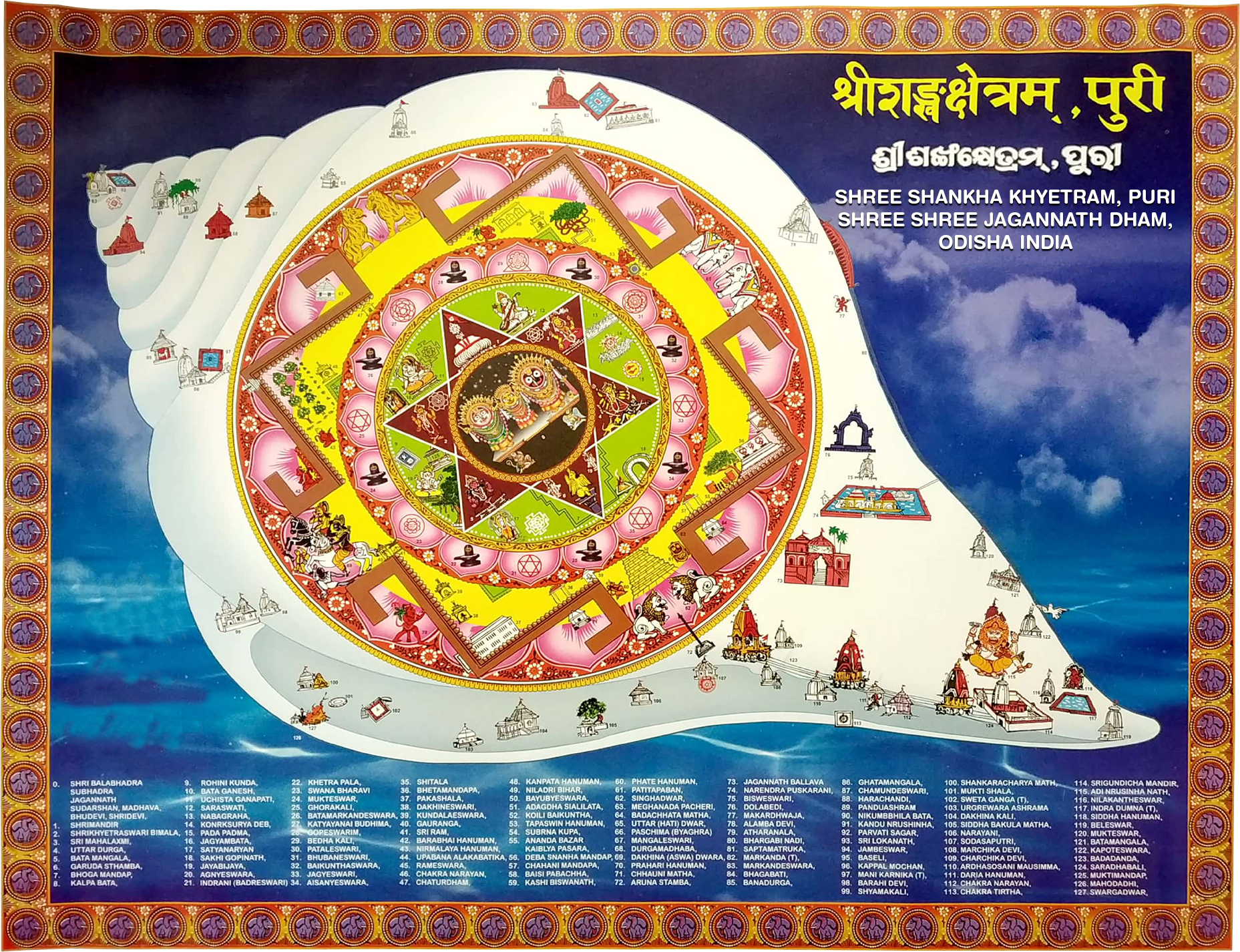